Reflections on KASS Annual Conference – “The Adolescent and the Phone” 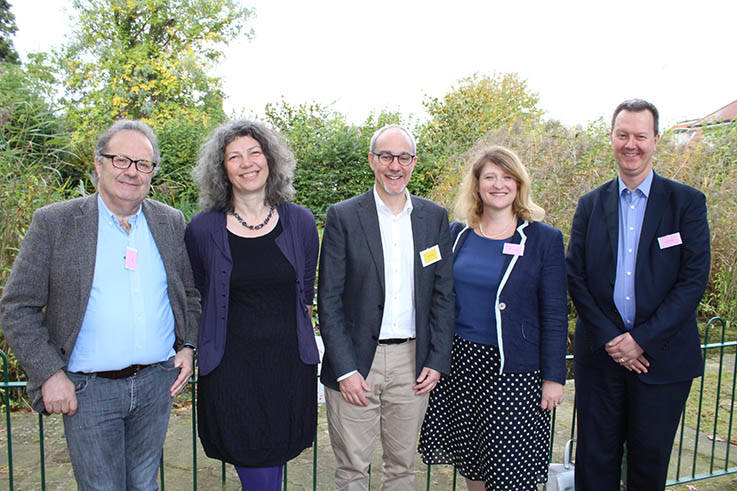 “The IPhone has celebrated its 10th birthday.  Ten years ago we would not be discussing this topic” said Robert Lobatto, Head of King Alfred School as he introduced this year’s King Alfred School conference “The Adolescent and the Phone”.   The last 10 years has seen a dramatic shift in the use of technology, from the family sharing a home PC to all family members having their own personal device.  This conference offered timely discussion, as the Government is about to publish a green paper on young people’s mental health services and social media is under the spotlight as a contributor for depression.  Experts in child cyber-psychology and teenage digital addiction came together at King Alfred School and shared their clinical research while two Headteachers expressed their polar opposite views on the subject of banning smartphones in schools.

Conference delegates were met on arrival with a voting system and were asked to decide whether (a) they agreed that phones should be banned in school, (b) phones should not be banned in schools or (c) they were undecided.  There was an overwhelming shift in views after delegates heard the expert’s debate.  Before the event, most attendees, including parents and educators were split between (a) in favor of a ban in schools and (c) undecided.  Later we will share the results of the post-conference vote.

Victoria Eadie – previously Headteacher of Feltham Community College
Ms Eadie, now CEO of Tudor Park Education and Chair of Hounslow Secondary Education Partnership, was clear that children need downtime from their phones during the school day.  After a seeing a remarkable change three years ago in the over-use of phones, she banned phones in her school.  The students were not able to self-regulate and parents pleaded with the school to get involved. The decision was made because she saw “the use of social media was highly destructive to the students’ wellbeing and education”.    She explained it has taken two years for the policy to become second nature to the children and now at lunchtime children engage with each other, take part in activities, play and communicate face-to-face.

Kathy Crewe Read, Head of Wolverhampton Grammar School
Kathy debated that phones are an integral part of young people’s lives.  She encourages children to bring phones into school and her teachers support students to use them responsibly, using them for data capture and storing notes in the classroom.  Kathy quoted Malcolm X who said, “Education is our passport to the future, for tomorrow belongs to the people who prepare for it today”.  Every other sector of society is embracing mobile technology; Kathy believes it is not right to expect teachers to ignore a valuable educational and social tool and young people deserve to be prepared for a techno-savvy world.

Phone Fast Fortnight
One of the founding principles of KAS is to seek out the latest research and evidence to help inform their teaching and prides itself in being open to new ideas.   The Upper School conducted its own ‘experiment’ to consider the impact of mobile phones on King Alfred students and measured the impact on their holistic experience in school (e.g. engagement, enthusiasm and focus in lessons; involvement in extracurricular activities; social interaction; sleep; self-regulation and levels of anxiety). During “Phone Fast Fortnight” all the children in Years 7 and 8 had no access to their phones during the school day.  The results demonstrated there was no significant difference in their wellbeing at home and at school after the “Fast”.

The post-fast survey revealed there had been a shift in perception amongst the students. Outcomes included that they checked their phone less often (by 16%), they were more open about their usage and said they took part in more interactions with the family.   One student said, “It made me realise how much time I spend on my phone every day”.

A KAS parent remarked after the experiment “I did find that my child’s desire to use his phone lasted longer in the evenings because he didn’t have it during the school day time, but that’s for us as parents to help him manage, and school time is for school life”.

Erin Cotter, founder of Reconnect Project
Ms Cotter asked the audience “Can you give up your phone for a week?” There was a mixed response.  She ran a digital detox initiative for schools and found sleep and family conversation benefited the most when phones were switched off.  Erin promotes an open approach, she brought young people into the debate where often they are marginalised and this allowed them to develop personal digital guidelines and rules.

Rosie Jenkins, a public health researcher at Imperial College
Rosie outlined the work from the Study of Cognition, Adolescence and Mobile Phones (SCAMP). Having researched 6,000 pupils from year 7 to 9 in 39 schools, it is the largest study in the world to investigate the impact of radio waves on the development of the adolescent brain.  King Alfred School is also taking part in the research and we look forward to knowing the findings due to published in 2019.

Professor Sonia Livingstone, London School of Economics and Political Science
Professor Livingstone, OBE, shared her year-long study of a class of Year 9 children’s use of digital media at school, at home and with their friends.  She found that children learn a host of skills when using digital media – they build communities, share a moment, and engage in spontaneous conversations.  They also develop digital resilience and most are able to evaluate which is trustworthy.  She said, “The internet is skaffolding new ways for children to explore and have fun, it opens up possibilities for agency and enables useful connections.

Sandra Eaton Grey, senior lecturer at the UCL Institute of Education
Sandra described childhood as a “cognitive journey that parents bring the children on”. It is her view that over-regulation and ignoring children’s data privacy rights drives undesirable online activity underground and compromises the ability of children and their parents to have high quality conversations about how they use technology in their everyday lives.

John Carr, Secretary of the UK Children’s Charities Coalition on Internet Safety
John Carr, calls the smartphone “a complicated friend”.  According to John “it is hard for parents not to panic when there are so many screaming headlines outlining all the negative aspects to the internet and in particular social media”.  But he also said “for the majority of people, for the majority of time, smartphones are life-enhancing and part of the challenge of being a 21st Century parent or teacher is to find ways to help young people navigate the negative aspects to smartphones”.

Dr. Richard Graham, Consultant Child & adolescent Psychiatrist
Dr. Graham, founder of the UK’s first dedicated technology addiction service for young people in London, has seen first-hand how young people are struggling with their use of technology.  He has witnessed incidence of depression and anxiety grow exponentially in young people.  He can compare the brain of a teenager addicted to social media to that of a drug addict’s as he described the smartphone as “a dopamine pump in every adolescent pocket”.

Dr Graham found in his extensive research of the subject that in schools where mobile phones are banned there is an overall improvement in attainment, but that the improvements are far greater for those who come from disadvantaged backgrounds. There is no benefit to those who enjoy greater advantage but no negative impact either.

Dr Graham concluded “teenagers are supposed to be rebels” and “parental use is where the ban should start.”

Tips for parents:
Many different views were expressed over the course of the one-day conference, and from these came many parental tips:

–          Create an open dialogue at home between parents and children as it stimulates a growth mindset
–          Know what your child is doing online and include safe maintenance – technology tools, monitoring and non-coercive time setting
–          Engage with technology in the family environment
–          Avoid the language of policing
–          Do not infantilise your child, the fear of terror makes them tune out
–          Believe in an end goal
–          Self regulation is key
–          Parents must mirror the habits they want for their children
–          Promote activities that enhance well-being – managed use or restriction is only going to be of value if something replaces what was previously used
–          Revise the four pillars for well being – Sleep, diet, activities, sense of purpose and relationships
–          Introduce digital sundown to reduce sleep debt
–          Create family media plan

Robert’s conclusion
In his conclusion Robert Lobatto, Head at King Alfred School concluded that one of the key messages of the conference is that there is a place for technology at school. He said “it is a subject that raises the passions” and reflected that in the past felt conflicted in his views as a parent and as a Head Teacher.  “We are keen to develop our teaching practices to involve technology but in a way that is in the student’s best interests”.  With reflection on the debate he heard in the KAS one-day conference, he had reached the conclusion that the correct way forward for KAS was to teach young people to engage responsibly with the incredibly powerful resource that technology offers.

The subject of agency was raised many times by many of our speakers, i.e. the capacity of individuals to act independently and to make their own free choices and in this case taking responsibility for their phone use, and deciding on their self-regulation.  Teachers at King Alfred School said they were in favor of the child having agency.  A Lower School teacher said” The conference as a whole has been fascinating and eye opening and I enjoyed the balanced discussion.  When voting initially I was undecided as to whether phones should be banned in school but at the end of the conference I voted for not banning phones in schools”.

The King Alfred School Society founded the school over a hundred years ago.  They called for a curriculum “geared to what was known about child development and not to the requirements of examination bodies”, an aim that is as relevant today as ever. Since the school began, it has continually researched what teaching practices are best for the children, both for their experience at school and their preparation for life.  This year’s conference again focused on a highly relevant topic that affects every family. 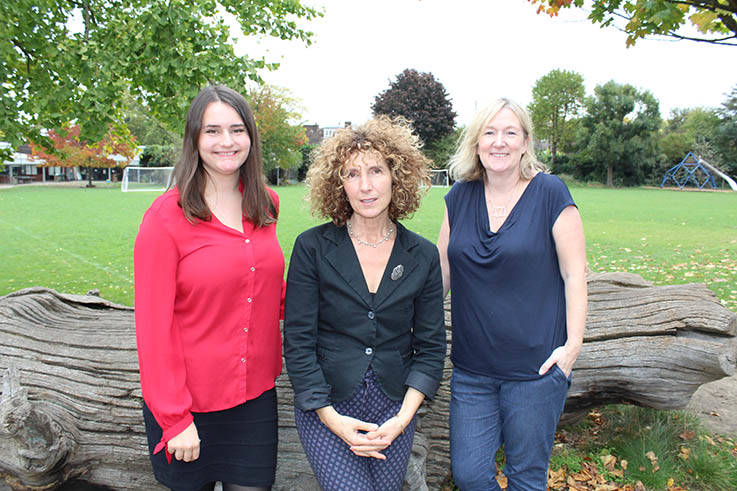