September 2020 date tbc: Reunion of 1960s and 1970s leavers
Register your interest to attend this get together of 1960s & 1070s leavers. It will be held at school and promises to be an excellent opportunity to revisit the site and meet up with your old school friends.

March 2020 date tbc: Connections event: Media & Creative Arts
Do you work in acting, film production, theatre, TV, publishing, photography, digital media, journalism? We are organising an event for OAs working in or interested in the broad category of media and creative arts. Please get in touch to register your interest and if you are able to host this event at your work place then we would be very grateful for any help.

‘‘Nice to meet you at the OA gathering at the Old Library on fireworks night.  My kids enjoyed the evening too. It was lovely catching up with teacher Lucy, who taught me 29 years ago! Romy Summers (OA 1997)

Over 70 OAs ranging from our most recent 2019 leavers to 1963 leavers Geoff Harris and Ray Tomkin joined us on a rainy, autumn evening on Saturday 9th November, before the Schools’ Fireworks Display.  It was a packed Old Library with OAs enjoying drinks and a catch up with old school friends and the atmosphere was celebratory.

We were delighted to welcome Juliette Fardon former Head of Learning Support at KAS and Head Robert as well as teachers Claire Murphy and Pauline Moloney were able to mingle with their former students.  We were also pleased to see Council members Sophie Ricard and her husband Ramon and Robert Dye. OA Romy Summers who popped in with her husband and children caught up with her teacher Lucy Bailey. Lucy wrote,

We were assisted at the event by our two new U6 event volunteers Charlotte Baker Maher and Georgina Friedlos who ably registered our attendees at the door. Georgina wrote, ” I would say it was a fantastic opportunity to connect with OAs, all inspiring people who have clearly put their KAS education to good use! It was also an excellent way to gain some work experience in organising events” 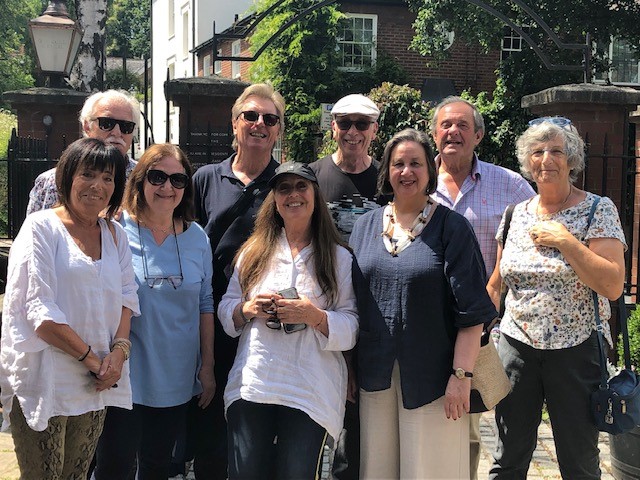 “I had not seen or heard from most of them for over 50 years, but while going around the grounds of KAS before the get-together, we shared and laughed at so many common memories of the places and the things we got up to at school”. Claire Epstein Yacobi

It is now three months since we had our 70's reunion

Nine of us met in the Bull & Bush to meet up with old classmates. Some of us had spent 14 years together, while others joined us later. I was sorry that more of the class could not make it but it proved an interesting experience, learning what we had all done in our lives, and what we are doing now. Those of us who came were: Elizabeth Callis (nee Pulver), Naomi Cotton, Jenny Leigh, Lesley Sheringham, Ian Jacobs, Robert Bierman, Tony Hoffman, Mike Herman and myself, Claire Yacobi (nee Epstein).
I had not seen or heard from most of them for over 50 years, but while going around the grounds of KAS before the get-together, we shared and laughed at so many common memories of the places and the things we got up to at school. We visited the nursery school, whose red rooves and stone walls made it recognizable despite the new windows.

The junior school “covered court” has long since disappeared and I was sad to see that Squirrel Hall in the upper school has all but disappeared, and hope that the bell which we saw in the archives (situated in what used to be the girls cloakroom!), will find a place of honour somewhere in the grounds. Squirrel Hall was a central place in our lives in the middle and upper schools, where every morning the class registers were called.

I was glad to see the all-important tennis courts/netball courts on the way to another important spot, the open-air theatre, where we put on plays and played in break time. Although it has been renewed somewhat, it still has the old feeling, while the field where we played hockey, football and cricket is still there and has not yet been built on. The Hall is being refurbished but still has the same lay-out and facade. During out reunion, Lizzie asked us all what we had taken with us when we left KAS. There were several reactions: freedom, equality, acceptance of others, thinking outside the box. I do hope that today’s children have the same and even more opportunities we experienced. I trust that next time I am in London, I will be able to meet up with all those I met in July, and many more. KAS has an important place in my childhood memories and experiences.

I would like to thank Shalaka for her efforts in trying to locate our classmates, and for enabling us to go around the school during the summer holiday, and also the archivist for letting us see some of the old photos.

The Alfredians office is here to help you to organise reunions for your year group so please do drop us a line at oa@kingalfred.org.uk 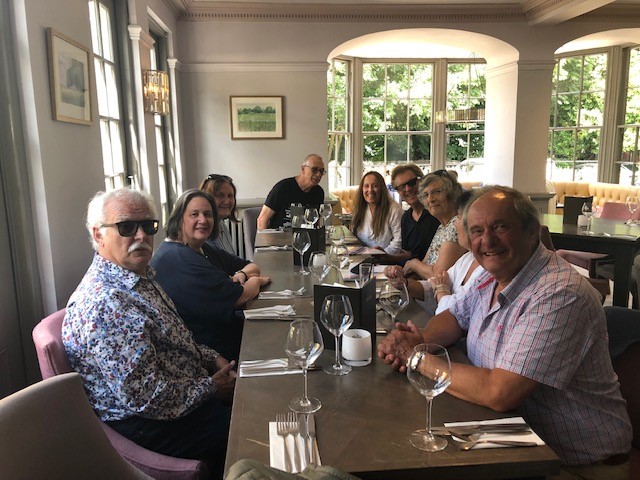 ‘It was so lovely to be back there with such beautiful memories of happy times long ago. It truly is the most wonderful school’. 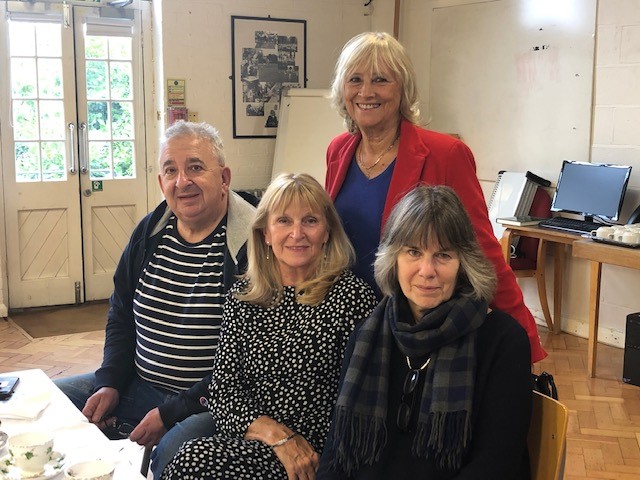 Our Past Parents’ Afternoon teas are a way for us to reconnect with parents who were once actively involved with the school when their children attended King Alfred.

All gave their time voluntarily and participated in different ways; organising Parent Staff events such as the summer fair or the Centenary gala, being parking attendants at the front gate or baking cakes for class gatherings.  We are delighted to welcome back groups of parents and indeed Old Alfredians to the Old Library and hear your memories and amusing stories of your time at the school, over cups of tea and scones!  The parents are often surprised at the changes they see to buildings and the ‘new’ rule of visitors signing in but they always leave comforted, in knowing the ethos that is at the heart of the school remains unchanged. 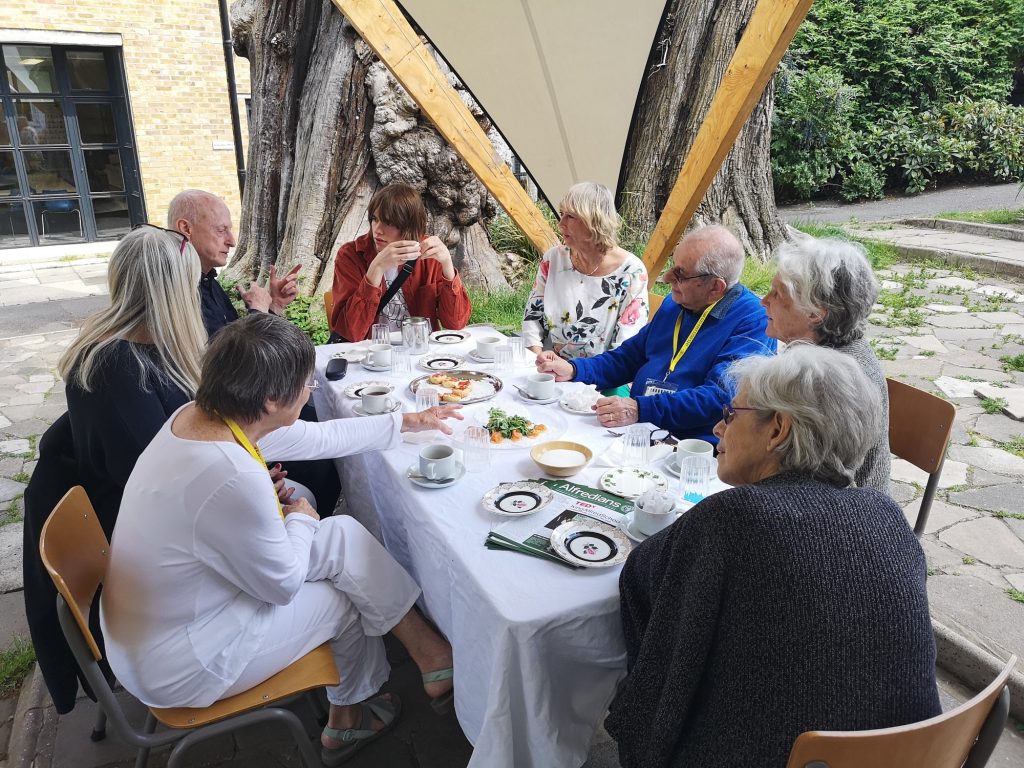 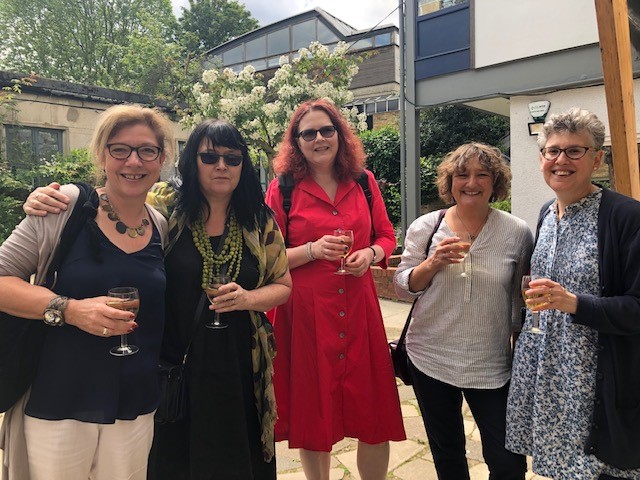 The Old Alfredians gathering took place under the canopy of Squirrel Hall.

We were delighted to welcome over 40 OAs back to school, some of who hadn’t visited in over 50 years. It was lovely to see Old Alfredians of all ages mingle and share memories of the school. 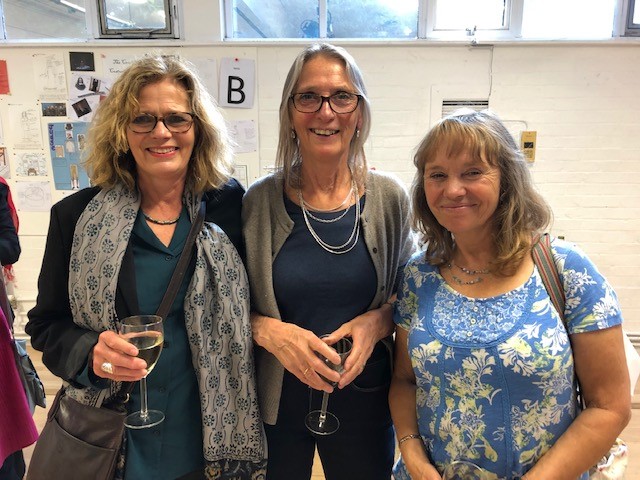 Old Alfredians and Past parents joined us for a drinks reception before viewing the A level art exhibition.  We were delighted and amused to hear stories from the 1971 leavers and we soon realised that some of these OAs were decidedly mischievous in their school days.

The OAs all commented on the talent of the A level students and the variety of art on display.

“I walked back through the school gates after some 56 years with a degree of trepidation. You can therefore imagine that to receive such a warm reception was very reassuring”

with the Old Alfredians
Discover