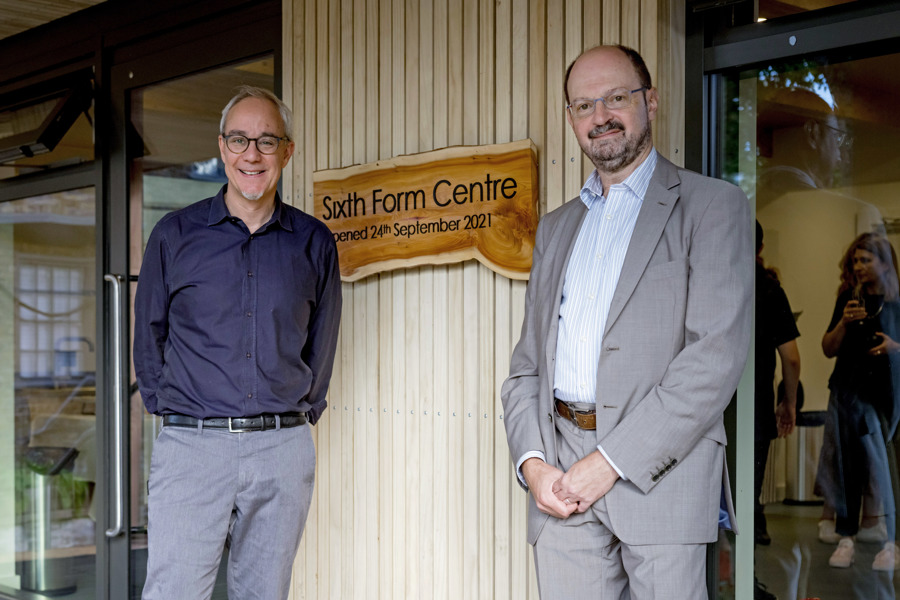 On Friday 24th September we celebrated the addition of a stunning new building to the Manor Wood campus. The new Sixth Form Centre was officially opened by Old Alfredian Ian Lush OBE, CEO Imperial Health Charity and Chair of NHS Charities Together . 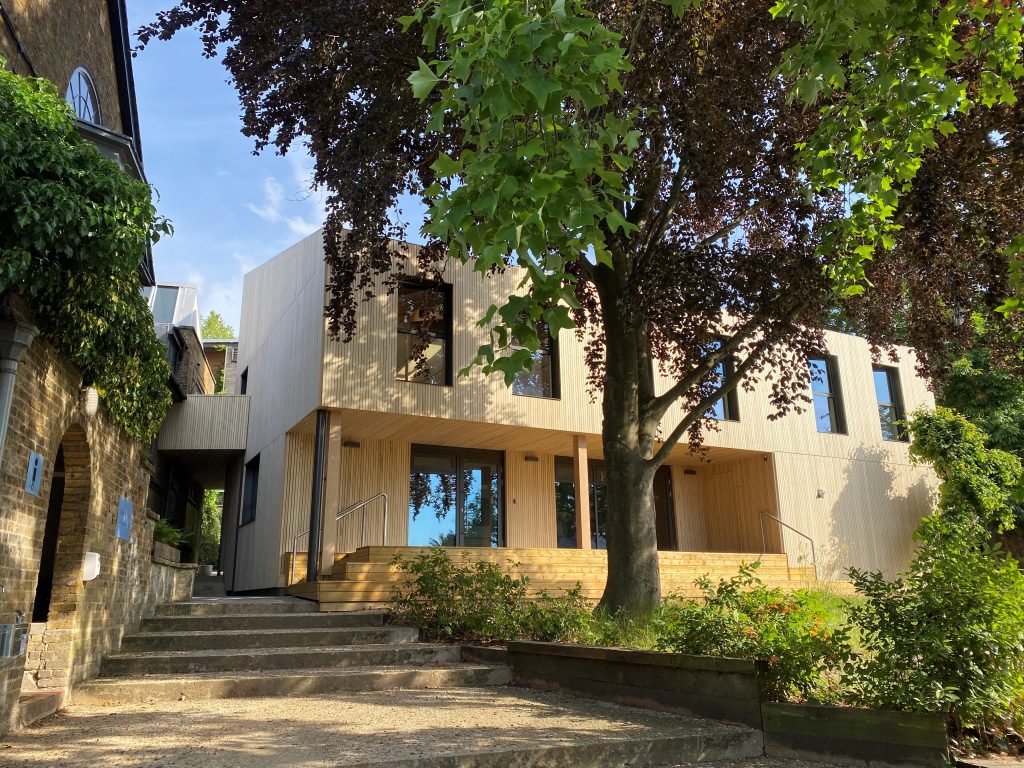 At the ceremony Ian spoke about his links to the school which he attended from age 4-18 and about his father who was the school architect responsible for many of the other buildings which make up the site. Concluding his speech he said, ”The King Alfred School has had a profound impact on me, my career and my life and I’m thrilled for all the Sixth Formers, now and in the future, who will get to use this splendid building.”

He then revealed a beautiful wooden plaque which was created using timber from the school site by another Old Alfredian, Leo Larche Hitchcox, who graduated from the Sixth Form last year. Built over the course of the last 18 months, the timber clad structure has created large study and communal areas over two floors alongside a seminar room, kitchen areas and offices for the Head of Sixth Form and our UCAS advisor. The design, by architects Walters & Cohen, has taken its inspiration from industrial and farm buildings that are robust, plain and also beautiful. 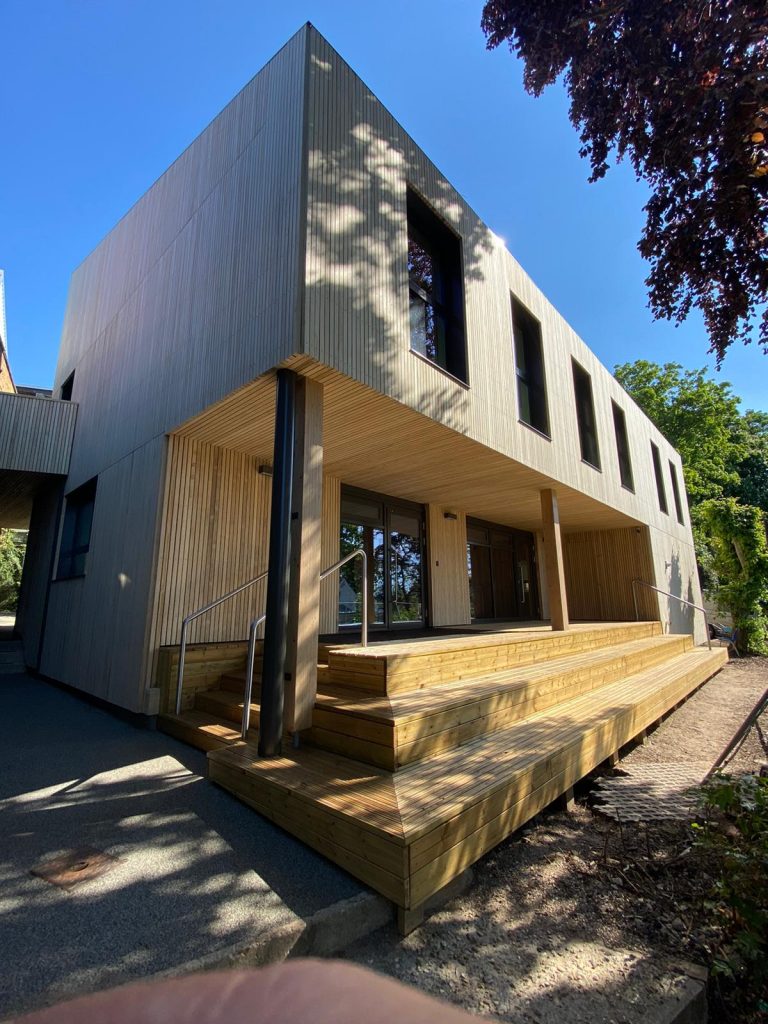 The inspiring new space provides a dedicated area where Sixth Form students can fully reach their academic potential, maximise their enjoyment of school, and be well-prepared for the next stage of their journey. Head Robert Lobatto is excited about the new development, saying: “At King Alfred we want everyone to thrive while they’re here and build the foundations for them to flourish once they leave. This building helps our Sixth Formers on that journey by giving them a sense of identity and of belonging within the school, while providing the space to develop the skills and attributes that they need when they move on to the next stage.”

Head of Estates, Zah Rasul oversaw the construction process during a global pandemic which saw limitations to building materials and workers forced to quarantine. Despite the challenges he, along with building contractor Aquatech, delivered the ambitious plans.

The details are what make the building truly stand out and care has been taken over every area; it is clad in sustainable Accoya wood – which is sourced from abundant, fast growing sustainably certified forests; designs on the glass doors in the building are based on the leaf shapes of the Copper Beech tree which stands in front of the building, and students were heavily involved in the design process. 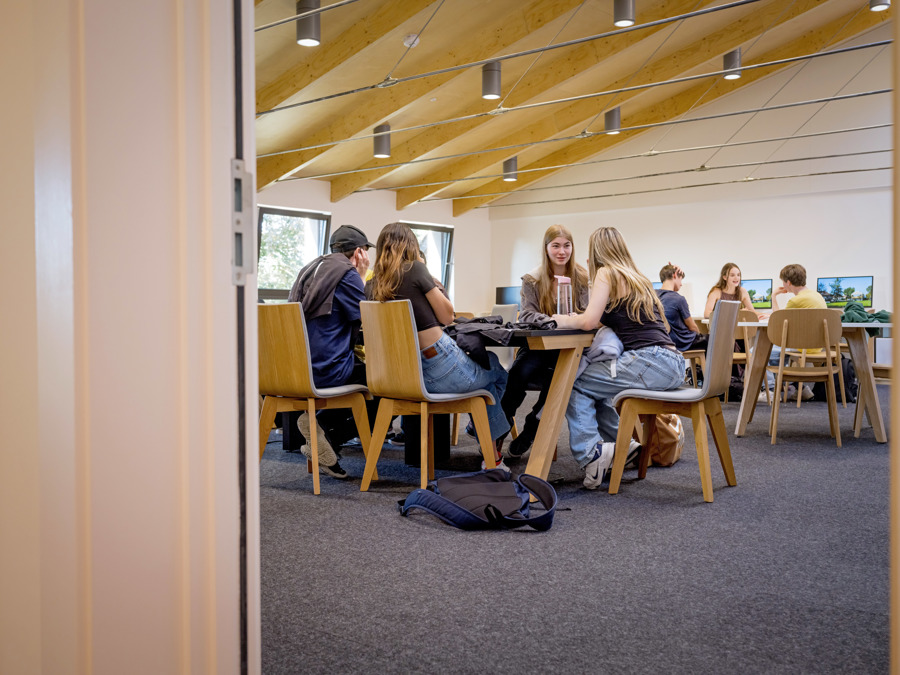 “Having this space where we can study and relax is great – the common room is big enough for all Sixth Formers to be able to hang out and socialise and we also have quiet areas away from the rest of the school, where we can focus on studying for our A levels.” Sal, Year 13

Director of Sixth Form, Takako Yeung is excited about this new chapter in the King Alfred Sixth Form story: “Our Sixth Form is a community where exam results are important, but we also believe that education is much more than that. This building is somewhere the students can take full ownership of, helping to manage it and create a space which enables them to be the best they can be.”

We were delighted to welcome Old Alfredian Ian Lush OBE, CEO of NHS Charities Together, to open the centre. As the Chief Executive of the Imperial Health Charity, Ian has played a critical role leading local hospitals through the coronavirus pandemic. In addition, Ian led the national fundraising campaign for NHS charities across the country. As chairman of NHS Charities Together – the umbrella organisation representing over 240 local NHS charities in the UK – he oversaw the successful Covid-19 Appeal, which raised more than £150 million. Read more about Ian in this article: Chief Executive Ian Lush awarded OBE in New Year Honours List – Imperial Health Charity (imperialcharity.org.uk) 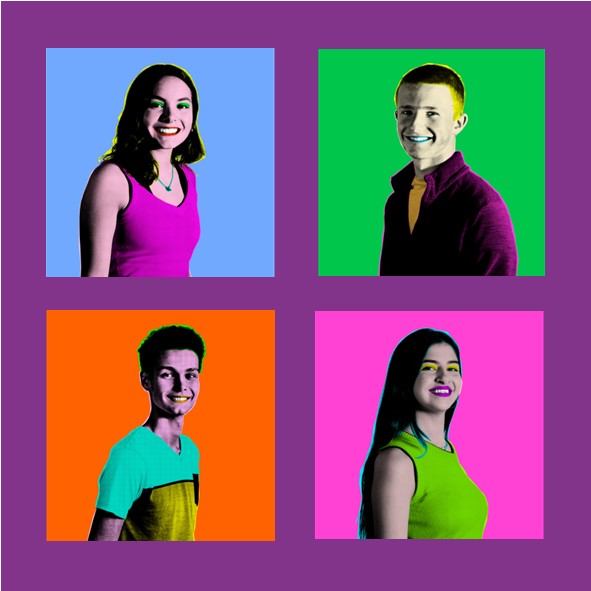