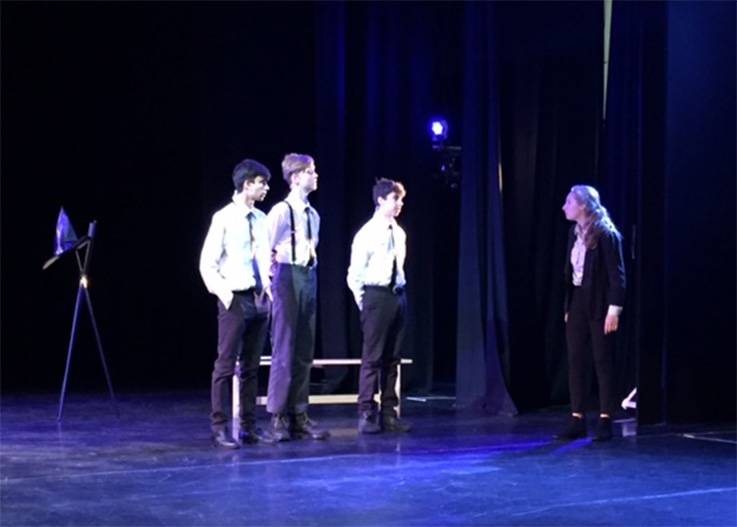 On Friday 25th November, a group of Year 10 and 11 student performers took part in the Shakespeare Schools Festival.

They took on a modern version of Macbeth, where the witches were an all-male cast of security guards and the rest of the cast were female, all trying to survive in a cut throat business world.

Macbeth was promoted early on in the play but then the ambition and power hungry Lady Macbeth, her wife, takes control and encourages Macbeth to murder Queen Duncan, the CEO and take the top spot for herself.

The murdering continues, as Macbeth is worried about who is suspicious of her, and all the events are watched throughout on the CCTV by the security guards, who continue throughout to manipulate the story.

The students have worked so hard this term to produce such a fantastic performance. They had the wonderful experience of performing at the artsdepot in Finchley, and were working with a professional technical team to create their final polished performance.

We performed with three other schools on the same evening, Queen Elizabeth Boys school presented an all-male version of A Merchant of Venice, Oasis Academy performed Romeo and Juliet, West Lea School did a music infused production of Henry V and then we were on last closing the entire festival.

It really was a fantastic evening for both performers and audience. Many thanks to everyone who was involved.